You are about to leave the MidAtlantic Farm Credit website. We are not responsible for nor do we control, endorse or guarantee content, products and/or services of the subsequent pages. The linked site may have a different privacy policy or provide less security than our website that you should be aware of. Thank you.
Feedback

You're invited to join us for our test plot Field Day event on August 19 in Centreville, MD.

This is the official webpage for our Farm Credit Test Plot! Check back to this page periodically for updates. If you're interested in past yield results, you can see the  2019 report here and the 2020 report here. Dr. Nicole Fiorellino, Assistant Professor & Extension Specialist of Agronomy at University of Maryland (UMD), scouted our dry land and irrigated test plots in mid-June and gave some great insight with her observations. She has a PhD in Environmental Science and Technology and has been in her current position since 2018. She is local to the Eastern Shore and manages the corn test plots at UMD’s Wye Research and Education Center in Queenstown.

Q: Can you summarize the 2021 planting and growing season in our region?

A: We’ve been off to a pretty good start this year. We didn’t have any major delays getting planting done. We did have a bit of a dry spell in the middle to the end of May, and then we got some good rain over Memorial Day weekend which was definitely needed by the crops. I think another few days without rain and we would have started seeing some real stress in some of the corn. I think we are about a week or so away from needing a bit more rain, but the crop looks good so far, even though it’s continued to be pretty dry and warm. Growers have started side dressing on some parts of Delmarva or are thinking about side dressing soon. A pretty uneventful but good start to the 2021 season.

Q: Do you see any differences between our dry land and irrigated plots?

A: So far, we don’t have too many major visual differences between the dry land and irrigated plots here. They were both side dressed earlier this week (June 9) and it appears that the irrigated plot has received water, while the dry land plot has not received any moisture. Water is often overlooked as our most limiting factor when we’re thinking about our corn growth. Sometimes we look into nitrogen or pH, but water is the vehicle that gets those nutrients into our plants. So not only is timely side dress and feeding of our crops important, but timely water/rain/irrigation after the nutrient application has been made. I suspect after the side dress on both plots and the subsequent irrigation that has only taken place on the irrigated plot, we may start to see some differences between those two plots now that we know the nutrients applied to the plots has received water on the irrigated plot.

Q: Can you determine anything about the corn from the emergence so far here?

A: Since emergence, there’s not any major observations so far. I’d say In general, all of the varieties in both the dry land and irrigated plots look good and are off to a really good start. I saw some visual leaf and coloration differences across a few of the varieties, which is not likely due to any kind of nutrient deficiencies at this point since we know that all of this corn was side dressed, so that may be a unique characteristic of those varieties. Nothing at this point that is alarming or might impact the rest of the growing season for any variety.

Q: What stage is the corn in – normal/abnormal for the time of the year? What should farmers be thinking about/looking for at this point in the corn crop?

A: The corn in these test plots are at about v5 or v6 stage, which is right about the time when growers are thinking about side dressing. Most corn here on Delmarva should be at this same stage, especially if you planted in a timely manner. Some of the later planted corn may still look good, but may not be ready for side dress yet. Most growers are checking the weather forecast and seeing when we might get some rain to water in the nitrogen that is about to get applied to their crops. At this point, if anyone is contemplating a replant, you’ve probably already made that decision, so we’re most likely past the window when folks would decide to replant and they’re moving forward with the crops that are in the ground at this point.

Our 2021 dryland and irrigated corn test plots were planted on May 3 at Chestnut Manor Farm in Centreville, MD. This is the third year of the Farm Credit corn test plot and we’re excited to have Dr. Nicole Fiorellino, University of Maryland Agronomist and Extension Specialist, join along with us during the growing season and harvest to provide value-added resources and share insight. 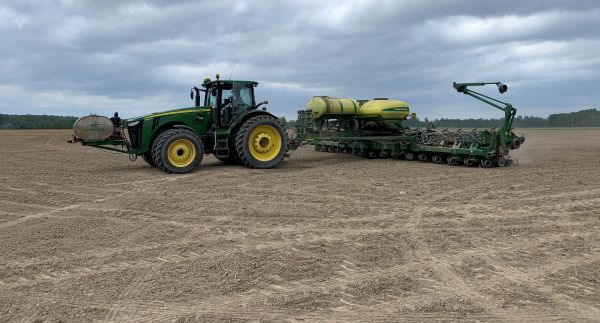 The hybrids were planted 16 rows wide, each 1,000’ long along the edge of Route 309. Signs will be going up along the road this summer so you can watch the varieties grow and follow the progress. We will continue to post updates here as the growing season progresses.

See the charts below for the planting order of both plots.

A must watch this week, March 11, on RFD-TV. The new series called "The Podfather" features four farmers, two of which are local Mid-Atlantic farmers. Temple Rhodes, 10th generation farmer from Centreville, Maryland, is owner and operator of Chestnut Manor Farm, where we have our corn test plots. Chris Weaver, 6th generation farmer from Finskburg, Maryland, participates in our test plots with Agri-Gold corn hybrids. Check out this preview and tune in this week to see how their soybean crops grew last year on The Podfather.