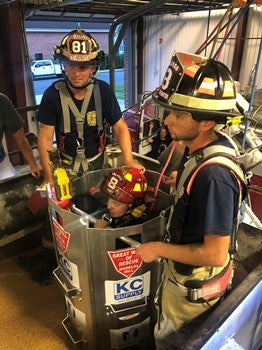 The grain bin rescue tubes were presented to the fire departments along with a grain simulator training demonstration on how to use them during an entrapment. Staff from Farm Credit attended both demonstrations at Rawlinsville Volunteer Fire Department in Holtwood, Pennsylvania on August 4 and Willards Volunteer Fire Company in Willards, Maryland on August 9.

“These grain rescue tubes play a crucial role in keeping rural America safe,” says Tom Truitt, CEO of MidAtlantic Farm Credit. “In collaboration with the hands-on training Nationwide provided, the rescue tubes will help first responders save the lives of our farmers.”

Rawlinsville and Willards volunteer fire departments won Nationwide’s Nominate Your Fire Department contest earlier this spring, providing them with the rescue tubes purchased by Farm Credit. The contest has attracted over 5,000 nominations nationally and has supplied grain rescue tubes and training to 200 rural fire departments across 30 states since 2014.

"Grain bin accidents can tragically impact individuals, families and entire communities," said Brad Liggett, president of Nationwide Agribusiness. "More than 900 cases of grain engulfment have been reported with a fatality rate of 62 percent in the past 50 years. Accident prevention means everyone working together, and Grain Bin Safety Week provides a forum for the agricultural community to help keep people safe."